I just wanted to send you a quick update on Xander (Edwards) and Ferguson (Edwardo). Both boys are doing really well. They are incredibly bonded. Xander is very protective of Ferguson and for the first couple months of integration in my home, Xander would block me from getting close to Ferguson and Ferguson presented as being very cautious. Ferguson will often cram himself in tight spaces with Xander to cuddle and they don’t seem to mind. When Ferguson first came out of the bathroom, it was Xander who would push his way around to get close. 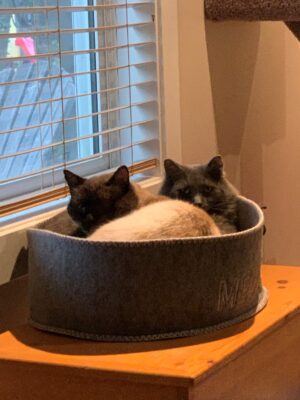 We have hit some positive milestones over the last month. Xander will let me pick him up, if only for a moment. When I try and pick up Ferguson, Xander jumps in and blocks me from getting too close. The boys love their toys, but only recently they will engage in play with me and my roommate. Ferguson is starting enjoy human interaction play. Both boys will let me brush them out and their new coats have been much softer. Both boys will let me pet them but only their terms. True cat attitude. Ferguson has a very healthy appetite and has filled out a little so he’s a solid big guy now. Xander remains slim and ninja like. I’m taking them for their first nail clipping next week at the local vet as they don’t have quite full trust with me yet to clip their nails but it will come. So wish me luck there. Overall this has been a great match. Thanks so much for your support.