More and more men are choosing to adopt a cat! In fact, a 2016 poll showed that 37% of men had a cat compared to 33% of women, with cat ownership highest among millennials. So while many people may associate cat ownership with older women, the data (and our experiences at MEOW!) shows that cat owners are a much more diverse group.

Of course we’re always thrilled to see our cats go to loving adoptive homes, no matter how an adopter identifies. But as Father’s Day approaches, we wanted to showcase a couple of amazing cat dads who have adopted cats from MEOW!

MEOW Foundation’s mandate is stray and abandoned cats. When you rescue cats who have lived much of their lives outdoors with limited human contact, they are likely to be quite shy, at least at first. McGill and Klee-yo were both shy and wary of humans. Shy cats do best with another cat in the home as some feline company helps them feel safe and secure. So adopters who are interested in any of our very shy cats either need to have a resident cat already, or take two home from MEOW!

While McGill loved other cats, he was very wary of humans and it took him a while to even accept pets with a petting stick. Klee-yo was a former mama who was very nervous and timid at the Adoption Centre. While they weren’t a bonded pair, we knew both of them would have to go to a home with a feline companion. So we were thrilled when Craig fell in love with both of them and took them home together. A year later, they have both come out of their shell and are loving life with their favourite human. 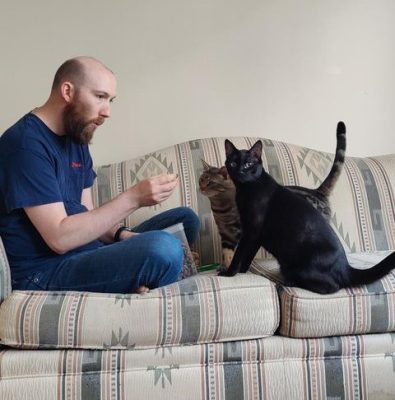 “I adopted McGill and Klee-yo just over a year ago,” Craig says. “I chose McGill because I absolutely love black cats, and Klee-yo’s picture in the cat-a-logue was so cute that I had to meet her.

“The two of them have brought so much joy into such a stressful period of life. I love seeing their two little faces in the window when I come home from work. McGill is very chatty and always has a story to tell me. He is very active and will also curl up and nap with me at any opportunity. Klee-yo loves to be brushed and loves lounging on the window perches when the sun is out. The two of them are such opposites, but are often playing and cuddling together.” 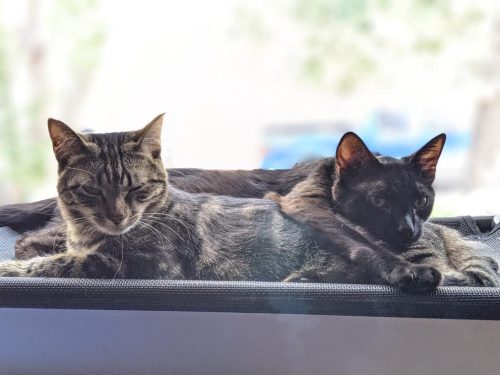 Esteban has been a dedicated MEOW volunteer since 2014, coming to the Adoption Centre every two weeks no matter the weather and taking photos of our adoptable cats for their online profiles. Esteban dreamed from a young age of having his own cat, but between getting his career established and not always living in pet-friendly housing, the timing was never quite right. Esteban says: “Over the last seven years, I’ve fallen in love with so many cats, and I’m always happy when they find their forever home, but also wondering when it will be my turn.”

Coincidentally, Esteban bought his own place at the same time as a MEOW foster home had a litter of kittens. He took two of them home! “As an only child, I always knew I would adopt two cats so they can keep each other company.” Esteban adopted Angelino and Ciccio Bello last summer. 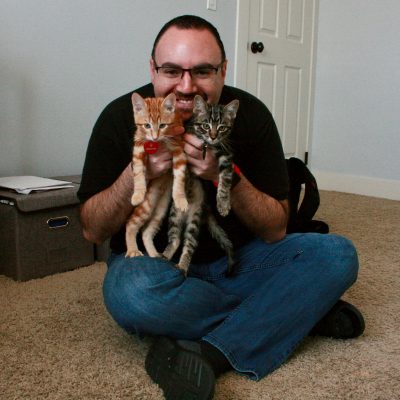 Almost year a later, Esteban, Angelino and Ciccio Bello are inseparable. Esteban says: “As a cat dad, I’m always thinking: What else can I bring them to play with? I realize now that they can play hours and hours with simple things like a restaurant receipt, so I ‘try’ not to buy them more toys on Amazon, which by the way, I have a wish list just for them (#SpoiledCats)! Every time I go to Costco, I’m looking for a good-condition box near the exit thinking: ‘Where else can I place a box so they have a place to sleep in? They only have 7 boxes!” 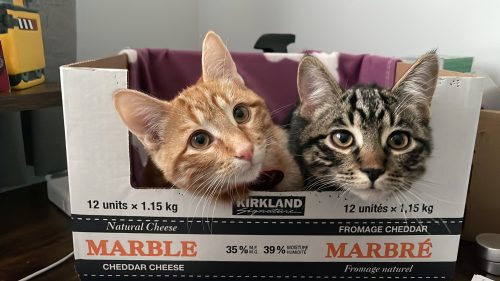 Esteban continues to be amazed at how much he is loving life with his two furry companions. “I never thought someone could be this happy. They bring me joy, happiness, and entertainment every single day.”

If these stories have inspired you to adopt a cat of your own, you couldn’t have picked a better time! We have a record number of cats in our care right now and would love to see them adopted into loving permanent homes. Visit our Adopt page to find out more about our process and see our available cats.